Confused When to Migrate to Drupal 8? 6 Factors to Consider for Your Next Upgrade

The time has come. The next version of Drupal–Drupal 8–is now here. And it offers some impressive upgrades, including better integration with outside services, improved user experience for administrators, mobile-first design, and enhanced language localization and accessibility features.

Even so, deciding to make the leap from a previous version of Drupal into the latest and greatest can be a bit scary and daunting. The Drupal 8 landscape is still changing, but there are some things you need to consider carefully when deciding if or when to upgrade to the new version.

Here’s some food for thought:

If you’re using Drupal 6, I have some bad news; this version is no longer officially supported. This means that the Drupal community won’t continue to make updates and fixes to things like security issues or exploits that may crop up over time. This means that if security is paramount to you and you stick with Drupal 6 or below, you’ll need to find and hire a developer who can keep your site secure.

This will likely cost you a minimum of $1,500 per year to have Drupal core secured and $7,500/year if you want bug fixes for popular modules along with that.

If you are on version 7, Drupal core will be supported until Drupal 9 is released. However, modules have no guarantee of being supported once Drupal 8 is more widely adopted.

If you are on Drupal 6, it’s not a question of if–but when–you need to upgrade. As time wears on, using an outmoded CMS will become increasingly costly. For each month you delay the upgrade, you’ll rack up bills that could have been offset by upgrading sooner. They become sunk costs, despite the fact that you’ll still need to move forward at some point.

This makes the upgrade process a matter of timing. When can you realistically expect to be able to make the transition?

Plan on replacing Drupal 6 in the first 6 months of 2017 at the latest. But don’t expect it to happen overnight. Once you have a timeline established, you’ll want to hire a vendor well before then.

If you overhaul your website every 3-4 years, you should be looking at Drupal 7. Because of the early stage of Drupal 8’s lifecycle and increased costs associated with upgrading (see below), it will likely be most beneficial for you to either stick with or upgrade to the most-recent previous version. You’ll get many of the same features, without the added cost of being an early adopter.

If you want to have a platform for 7-8 years, consider Drupal 8 as a way to future-proof your site. We know that Drupal 9 will be coming–probably sooner than we all think. That means that if you upgrade to 7 now, with the intent of waiting this long before migrating again, you’ll likely get stuck with an added expense in the middle of your development cycle if your older version becomes deprecated or vulnerable to security threats.

Because it’s new and has more sophisticated features, having your site moved to Drupal 8 will cost more than maintaining your existing site. Currently, there is about 25% additional overhead to develop or upgrade a Drupal 8 site compared to Drupal 7, depending on the features you need.

Weigh that against the cost of upgrading in 3-4 years and see if it makes sense for you to wait for developers to learn the new system more completely before making the jump.

Are the modules you need ready in Drupal 8? Are you willing to pay for maintenance of abandoned/buggy Drupal 7 modules?

You can generally find information on the current compatibility of the modules you’re using by finding their listing in the Drupal module directory, or on the developer’s website. 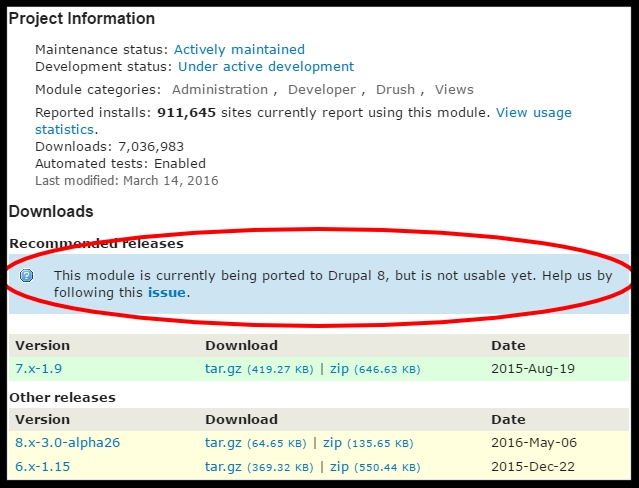 If you’re not sure, you may want to hire someone to do a quick assessment of your current setup and give you an idea for what makes the most sense given your modules and their compatibility.

What’s important to your organization? Security? Flexibility? Total cost of ownership? Project budget? These factors will be critical in deciding when to upgrade to Drupal 8.

Of course, each organization will be in a slightly different boat when it comes to their current platform and their needs. You’ll need to prioritize the must-haves for your organization and then see which ones are currently viable and which ones are not.

You may find that, for instance, although security is of paramount importance, that some of your existing modules are not yet ready for Drupal 8. This means you’ll need to decide which thing is more important–could you do without the module or find a replacement?–and then act accordingly.

If you’d like to discuss your current website and have us assess it for migration to Drupal 8, just drop us an email and we can give you a hand.